For the past 19 months, I have been a father, and it has been a fun, rewarding, and exhausting experience. Having a baby is like getting a really large multi-year grant: You’re like “Yay, I got the grant!” and then you’re like, “Damn, this is a lot of work…”

I have been a new father and a nonprofit director simultaneously, and this combination is a terrible experiment that no one should try at home. Sleep has been as elusive as general operating funds. This is why when I carry the baby down the street, passersby often remark, “Aw, what a beautiful grandson you have.”

Still, the baby is magical. I have been flexing my hours so I could spend every Friday with him. First, because life is short, and I don’t want to wish later that I had spent more time with my son. And second, because I am training him to be a nonprofit warrior, passing down the wisdom I have gained so that he could eventually take over for me. “Learn your ABC’s, son,” I would say, “so that one day you may fight injustice through grantwriting.”

I look forward to each week. And as I take care of him and teach him things, I have also been learning many profound lessons, lessons that we can all apply to our work: 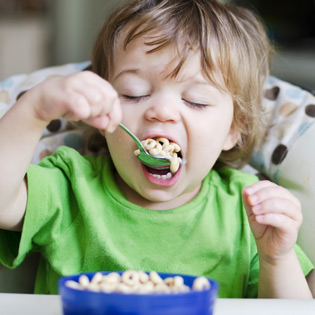 To feed a toddler is to know the futility of existence. You must have the reflex of a cat. Or a ninja. A ninja cat. You must balance the unhealthy stupid crap that they like to eat with the nutritious crap that they refuse to eat, and they make you make stupid airplane noises, and then you try begging them to just try it, just try this broccoli for Daddy please, it’s good, please just try it…OK fine, here’s some more Cheerios. Now I find ways to hide vegetables in stuff he likes; he will eat broccoli, if it’s chopped finely and mixed into mashed potatoes. Applying this lesson: Learn how to deliver bad news or negative feedback by serving it alongside good news or good feedback.

Co-sleeping may not be the best idea. When Viet was born, he was so snuggly that we decided to have him sleep with us. It was so sweet to be able to cuddle with our little baby. Now he won’t sleep by himself, won’t leave the bed, and he wakes up five or six times per night. In the morning, at 6am, he starts climbing on our faces, smacking us with his little hands until we wake up. Applying this lesson: Make sure to weigh short-term vs. long-term costs and benefits. Hire a passionate staff who may need more support, or an experienced one who may not need as much coaching but may be less successful in the long-term? Get a decent chair that costs more, or get a crappy one for cheaper on Craigslist?

Toddlers throw stuff they don’t like without any remorse. Anything the toddler does not like he will throw across the room, which aggravates me to no ends. Blueberries, which he loves, go flying as soon as he’s had enough. Same goes with water, Cheerios, and pouches of delicious baby food like organic pureed butternut squash quinoa beet combo. Applying this lesson: Sounds cruel, but stop hanging on to people and stuff that are not good fit for your organization. That goes for programs, board members who just suck, donors or funders who demand too much, or staff or volunteers who are clearly not good matches for the team.

A toddler only needs a brief moment to get into trouble. You put your head down for five seconds, and next thing you know, he’s on top of the wine cabinet, or he’s splashing around in the toilet, or eating a toenail clipping that he found from some random place, or he’s voting for the Tea Party. Applying this lesson: Don’t be complacent. Due your due diligence on everything. Especially legal and financial stuff. A single misstep could lead to your org being audited or sued or whatever. (Note to self: Stop clipping toenails in baby’s crib). A toddler learns from repetition. We have listened to “The Wheels on the Bus” at least 900,000 times now. And if I have to read “Zoom Zoom Baby” one more time, I will lose it. Is baby on the boat? No, it’s a funny bunny! Is Baby in the car, zoom zoom?! Let’s lift the flap to find out! Yes, the baby is in the car! He’s always in the car! We read this book five to ten times every day. It is boring as hell. Then, one day, as we lifted the flap, he burst out for the first time with “No! Funny bunny!” It was the best day ever. I realized my son was absorbing everything, and soon he started completing sentences, memorizing every vocabulary. Applying this lesson: Boring, repetitive stuff forms good habits. Take notes diligently for every meeting. Fill out paperwork for all expenditures. Check in with staff and board members frequently. Immediately thank every donor. (And check out “If You Give a Board Treasurer a Cookie and other classic children’s books about nonprofits.”)

Small things are magical. In the morning and at night we try to brush Viet’s teeth. He has a little Pooh Bear brush that he likes. Since he’s so impatient, we can only brush for about ten seconds. And then we say, “OK, you want to brush?” He then grabs the brush, brushes his teeth for literally two seconds, and gives it back. We say “Yay!” and make a big fuss out of it. Recently he started drawing random squiggles. “What’s this?” I would ask. “Bumblebee,” he would answer proudly. “Yay!” we would say. Applying this lesson: Celebrate the small victories. The work is difficult, and there’s so much of it, and we often don’t take time to celebrate small or even large accomplishments. Don’t take things for granted. Slow down, celebrate accomplishments, and recognize the people on the team.

Toddlers’ fingers are always sticky. They are stain magnets. We change this kids’ clothes three or four times a day. Despite our constant following him around with a wet towel, he runs around the house, his face smeared with blueberry juice, his hands crusted with who the hell knows what. He gets pureed food and bits of fruit everywhere. We spend hours cleaning him and the house up each day. Applying this lesson: Be OK with messes on occasion. This could be a figurative mess (meetings that don’t start on time) or a literally one, such as an untidy office space. You could fight it and stress yourself out, or you could ignore it for now and resolve to deal with it later. We could all do with a more Zen-like approach to the messes at our organizations.

The diaper bag should always be stocked. One time it wasn’t. I had a meeting at a restaurant. The baby had a diaper accident, a really awful one. I took him to the bathroom and opened his bag and realized we didn’t have a change of clothes. You must always have diapers, wipes, and A CHANGE OF CLOTHES!! I took off his onesie and pants, and put his jacket on him. He looked ridiculous with no pants and no shirt beneath his jacket. The meeting had to end early so I could go home with my stinky, cold baby. It was with a potential funder I was meeting with. Applying this lesson: Always be prepared. Have first-aid kits at the office and at all programs. Have an emergency plan. Stock up on food and water for the office in case an earthquake or snowstorm hits.

Toddlers have specific things that calm them. Today, on the drive home, he started whining, “Petso baby.” “Daddy’s driving,” I said, “We don’t have any pretzels for baby.” “Mama petso! Mama petso!” he screamed. I had to tell him that his mother was not there, in the car, to give him any pretzels. That unleashed a fury of banshee-like screeching for several minutes. I started singing Wheel on the Bus. After a while he calmed down and sang along. Applying this lesson: Well, two lessons. First, be loud to get what you want; helpful when doing advocacy work. And second, find out what resonates with staff, board, volunteers, donors, etc. A staff who was particularly stand-offish, for example, softened up when I found out he and l liked some of the same video games.

Finally, toddlers find joy in everything. Despite the sleeplessness, the constant messes, the endless stupid children’s songs, the incessant worrying and self-doubts about our parenting skills; despite taking an hour to leave the house, and occasionally wishing we could just spontaneously see a movie or go to a restaurant; despite the exhaustion, it has been and continues to be one of the most amazing things I’ve ever experienced. And one of the top reasons is that our one-and-a-half-year-old son finds joy in every little thing. We take him outside and he sniffs the flowers and the fallen leaves, and he stoops to observe an ant, and he points at the letters that he knows and pronounces them with his baby accent (“Dub-doo-doo”), and he spins around for no reason, and touches dirty car bumpers like they’re magical. Inside the house, he loves an empty paper towel roll, and he hides behind the curtain and giggles as I pretend to not know where he is, and he savors a single toasted pumpkin seed before throwing the rest on the rug.

Applying this lesson: The work we do is difficult and sometimes heartbreaking. We must find joy and happiness where we can and not get consumed by the gravity of our jobs and the endless obstacles we face like restricted funding. There is beauty, and kindness, and humor everywhere, and we must not be so absorbed by our work that they pass us by. We must take time to savor—

Oh crap, I gotta go, the baby is standing in front of the TV, smacking it repeatedly with a Lego block!