In the nonprofit sector, there are few things as grave as “double-dipping.” DD is a no-good, very bad thing. In fact, I imagine if we had a nonprofit trash-talking contest, it would go like this:

Nonprofiteer 1: #yononprofitmama so inconsiderate, she attends a meeting and doesn’t sign in.

Nonprofiteer 2: Oh yeah? Well, #yononprofitmama so inexperienced in finance, she doesn’t know the difference between a fiscal year and a calendar year.

Audience: Oh no! You didn’t just say that about his mother!

Nonprofiteer 1: #yononprofitmama so unethical, she asked a funder or donor to pay for something that is already paid for by another funder or donor, thus, she is therefore double-dipping.

Why am I bringing this up? Well, to start the #yononprofitmama trend on Twitter. But mainly to talk about how ridiculous and aggravating nonprofit accounting and reporting has become.

Over the holidays I had to spend about ten hours to complete a grant report (Note to funders: Please do not make anything due from December 20th to January 10th). The foundation, like most funders, did not want to pay more than 20% of any project. OK, I thought, I’ll just multiply the actuals of each line item by 20% and report that.

But wait! This foundation did not want to pay for more than 15% of unwholesome, disgusting, frivolous indirect expenses like legally-required insurance, office rent, and fundraising. Well, I’ll just multiply all indirect expense actuals by 15%, and then multiply all other expenses by 20% or more, like we had proposed in the grant application (See “10 steps for writing a kick-ass grant proposal“). Of course, this is just one funder out of ten, so I’ll have to figure out what expenses the other foundations are paying, and how much of each line item.

But wait! This foundation’s fiscal year does not align with my org’s fiscal year and they just want report on the stuff that falls within their fiscal year! Time to re-run some numbers in Quickbooks with different time periods and redo the whole Excel report.

Oh no! Because of the misalignment of fiscal years across different funders, it looks like we’re “double-dipping” by a few thousand dollars in the first half of our fiscal year, and then don’t have any funds to cover the second half! Must. Rerun. Numbers.

Six hours later, my toddler found me under my desk, rocking back and forth, murmuring something about inventing a time machine, going back in time, and preventing my parents from meeting so that I wouldn’t be born and thus wouldn’t have to do this financial report.

All right, let’s talk about finance and the effects of funders’ micromanagement of nonprofits. As anyone who has ever worked under a micromanaging boss knows, it is one of the most aggravating and demoralizing situations ever. Micromanagers, intentionally or not, communicate the message of “I don’t trust you. I don’t think you’re capable. I’m clearly better at your job than you. You look like a weasel.” The most effective bosses know that you should work with your team to set goals, responsibilities, and timelines, ask what the team needs in terms of support, and then trust everyone to do their job. You can check in once a while to see if anyone needs additional help or feedback, but overall you leave them alone because they are intelligent, capable individuals; otherwise, why did you hire them? This trusting and supportive relationship not only creates happier employees, but the outcomes are always better. Only when a team member is so new, so inexperienced, should you ever micromanage. And even so, you ease up once the newbie gets his bearing.

Funders’ micromanagement of nonprofit finances is prevalent and hardly ever leads to anything good. Unable to avoid the myriad restrictions, we resort to doing stuff outside our plans and using nonprofit arcane accounting magic to get the numbers to line up: “Let’s see…eye of a newt, toe of a frog, a piece of Appendix A from a grant application. Double double, fiscal troubles, Quickbooks churn, actuals bubble! The numbers all align! Every expense actual is now perfectly allocated to every funder! Ahahahahahahaha!”

Or, at least that was what I was hallucinating while working on this report.

One time at my previous organization, because we were a scrappy and romantic nonprofit that scrimped and saved, we underspent by a thousand dollars while still meeting all outcomes. “Any funds unused by the end of the contract period must be returned,” the contract said. Since this funder hated paying for staff, but had no problem paying for supplies, staff went and bought dozens of pads of sticky easel paper. These are used for all sorts of things—like retreats and workshops and when we’re out of paper towels—and are expensive as hell, so it made sense to stock up on them, enough to last us through a zombie apocalypse. Still, if we hadn’t been micromanaged, this money would have been put to much better use, like building a reserve in case of emergencies.

Being clever in spending and in using nonprofit accounting voodoo may sound like fun, but we are wasting a significant amount of time that could be spent on outcomes. Most people only have one boss at a time. If funders are acting like the bosses of nonprofits, then each organization has dozens of supervisors, each with his own idiosyncrasies. Imagine: twelve micromanaging bosses that you have to report to. The thousands of hours we nonprofits spend trying to navigate every funder’s restrictions could be spent, you know, helping people. (See: “Nonprofit funding: Ordering a cake and restricting it too.”)

If we are going to tackle the world’s challenges, there has to be trust and equal partnership between funders and nonprofits. Funders must stop micromanaging and trust us nonprofits do our jobs. If you trust an organization enough to select to fund it, then trust that it knows what it’s doing. Work with the nonprofit and agree to some goals, and then help it achieve those goals or get out of the way.

The restrictions foundations impose are aggravating and oftentimes nonsensical. How can any of us possibly be “double-dipping” when most of us wake up every day with night terrors about our budget gap and whether we can afford to keep our existing staff next fiscal year. Double-dipping, overhead ratios, indirect costs—all red herrings. Funders can keep micromanaging us nonprofits around these things. Or we can all focus on achieving outcomes together instead.

Either way, no one better call my mama, or my org, a double-dipper. 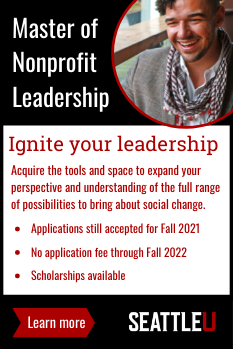