My apologies for being absent the past couple of weeks. My little son arrived on Tuesday, after 13 hours of hard labor that were almost as difficult as some grant application processes. We’re naming him Viet William Prinzing Le. We got lots of good suggestions for names, but the auctioning off the baby’s naming rights mentioned earlier…well, that was actually an April Fool’s joke. (Although, I think we may just do that if we have another kid, maybe get some corporate sponsors. “Doritos Shamwow Le” does have a nice ring to it).

I am sleep deprived, looking like an extra from the Walking Dead. I have not had more than two consecutive hours of sleep for seven days. Don’t worry, though, the poor sleep and exhaustion hasn’t been affecting me at yes, yes we would love a donation, Benjamin Franklin, thank you!

Huh? Sorry. Where was I? Oh yes, the baby. This has been one of the hardest few days of my life, trying to stay up to console the baby. For the first few days, he wouldn’t sleep without being held. Now he can for a short period of time, but once in a while, he jolts awake, and I have to tap him and say soothing things like “shhhhh, shhhh, Daddy’s here, and you don’t have to plan an annual dinner…” It is exhausting. And I have to learn all sorts of new stuff, like how to use cloth diapers (Since this is Seattle, the diapers are organic, gluten-free, and artisanal, made with hemp fibers). Having a baby changes you. Last week, I walked into the birthing center a boy. When I walked out, I was no longer a boy.

But a boy with an awesome baby! Sweeeet!!! Seriously, despite the exhaustion, the long nights, the hoarse voice, and the constant lingering smell of spit-up that surrounds me, this is one of the most amazing things I’ve ever experienced. How awesome is it, you ask? Since this is a nonprofit blog, I’ll try to put it into nonprofit perspective:

Having a sweet little baby is better than all those things. And almost as good as a multiyear general operating grant.

In less than three weeks, my son will be born, and I’ll be a father for the first time. I am very nervous about being a father. Terrified, really. But not nearly as terrified as I am of our annual dinner, which is coming up shortly after the baby is born.

Annual events are some of the most terrifying things we nonprofit people deal with. According to statistics I’ve Googled and/or made up, they are responsible for 77% of nervous breakdowns experienced by nonprofit staff and board members (Endless useless meetings and co-workers who leave their dishes in the sink for days make up the other 5% and 18%, respectively).

I started talking to other ED’s, and while all of them agree that special events are scary—with a couple of ED’s hyperventilating at the words “special events” and had to breathe into a paper bag while the rest of us chant “general operating, general operating” over and over to calm them down—some say that having a baby is scarier.

So, let us examine this as objectively as we can in order to determine which is scarier, having a baby, or planning an annual fundraising event. We will base our analysis on several dimensions: Fragility, Dependency, Time, Ickiness, Effort, Community Perception, and Cuteness.

Fragility: Babies are fragile, being all tiny and stuff. They are helpless, especially in the beginning, during their larval conical-head stage. Annual events are also fragile, held in check usually by one event planner with an increasingly twitchy eye who at any moment might strangle the rest of the planning committee, causing the whole thing to implode. Still, no one says, “It’s as easy as taking candy from a hyper-caffeinated special event planner.” In terms of scariness, the edge goes to babies on this dimension.

Dependency: Babies depend on us for everything. Meanwhile, we depend on the annual dinner for unrestricted funds, usually to plug up major gaps in the budget. Still, if for some reason my wife and I are not here, we have a good network of relatives to ensure our baby is well taken care of. If the annual dinner does not go well, though, we may have to lay off staff, cut down on health insurance, and use one-ply toilet paper. Annual event clearly wins this one.

Time: Annual events take six months to a year to plan, with an additional six months to acknowledge all the donors and do the accounting and recover from the fist-fights and nervous breakdowns. Babies take 18 years to raise to adulthood, and then an additional 7 to 10 years for them to “find themselves” and become independent. Babies win this one.

Ickiness: Babies tend to throw up and do worse things to you. You have to change their diapers. No one at an annual event throws up on anyone, except that one dinner in 2009, when an Executive Director had way too much pinot noir after not eating much food because there was nothing vegan. Edge: babies.

Community perception: People are evolutionarily programmed to like babies. People with babies receive residual good will. Annual events can bring good will to an organization, but if a whole bunch of things go wrong, or maybe one  thing, such as the ED’s slurring during his speech and ranting about wombats,  because of a couple glasses of wine, they can screw an organization’s image and destroy relationships and lead to the board’s imposing an unfair two-drink limit on staff. Edge: annual events.

All right, so that’s 3 for babies, 3 for annual events. It’s a tie, and the final dimension is Cuteness.  While there are some donors who are adorable (especially if they raise their paddle at the right level and have that sparkle in their eye), the general consensus is that babies are cuter. If babies are cute, it means they are not scary, so annual events wins this dimension in terms of scariness.

Based on my thorough scientific analysis, it is conclusive: Babies are terrifying, but at least they’re cuddly, which is more than we can say for annual events. However, the combination of having a baby at the same time as an annual event is the most terrifying of all possible realities, so if anyone needs me, I’ll be under my cubicle desk in the fetal position with a case of pinot noir until May or June. 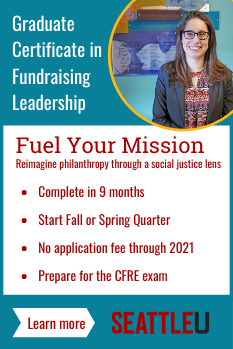