Hi everyone. I am so exhausted. I don’t think I have thought this intensely for this long a period of time since, I don’t know, maybe the first season of Game of Thrones. I am now in Serbia in the city of Belgrade, some place that I never thought I would be. No one really says, “I want to go to Serbia for vacation” or “We’re going to Serbia for our honeymoon” or “Congratulations, you just won a free trip to Serbia!”

And that’s too bad, because the city is beautiful. Belgrade has been fought over in 115 wars and burned to the ground 44 times in its history by various armies. But, except for the buildings bombed by NATO during the Kosovo War in 1999, everything looks great, with shiny glass buildings standing harmoniously next to ancient architecture. I have been trying to absorb everything. There are some painful memories of the brutal atrocities committed during the tumultuous past, a significant part by the Serb army, but as a whole the country is trying to move forward with its future, a major step being joining the European Union.

The past few days have been intense. Besides the constant flow of information that requires thinking and analysis, we have been meeting with European alums of the program, which leads to fascinating conversations. Thank goodness the US politicians managed to negotiate a brilliant deal to kick the can down the road until early next year regarding the shutdown, because it has been embarrassing for us American fellows. I was surprised to learn just how closely everyone over here follows our US politics. “During major debates,” said one of the European alums, “my friends and I get together and make popcorn. It’s like a movie for us.”

The shutdown fiasco, in some ways, has made the US more approachable. “It was very thoughtful of you to do that,” said one Serbian local I met over dinner, “Now we don’t feel so bad about our own crazy fringe politicians who are also trying to destroy the country.”

The typical European dinner lasts for three years, and wine is heavily featured, which has led to some great discussions about politics, philosophy, and human nature and stuff. Lately I’ve also been heavily engaged in arguments about veganism, especially here in Serbia, where the national food seems to be meat. The typical meal here starts with a meat salad, followed by a giant plate of grilled meat, then, for dessert, a refreshing meat sorbet. I’m only exaggerating a little bit.

“Vu,” said an alum from Serbia, “how can you not eat meat? Life is so short. Did you watch Breaking Bad? To be vegan is to be Walter White before cancer caused him to reevaluate his life. He was not living.” Walter White, I said, made terrible choices throughout his life, including not getting life insurance, choices that led to the death of dozens of people, many of them innocent. For more than an hour we argued, and I’ll spare you the details, but it amazed me how philosophical and knowledgeable people are over here about American culture.

Today, we met with two Executive Directors of local nonprofits. Unlike the stylish ones in Brussels and Copenhagen, these two look like real EDs: hopeful, tired, passionate, frustrated, humble, maybe suffering from a slight drinking problem. Here in Serbia there exist thousands of nonprofits. From the conversations we had, it seems they struggle just as much, or even more, than we are in the US. I nearly cried with empathy when one talked about how they are struggling to be sustainable, since funders have been refusing to pay for administrative expenses, only programs. Despite the huge number of nonprofits, the public still is ignorant or leery of them, a remnant of the Milosevic era when nonprofits were considered spies and traitors against the dictatorial regime. “So I got a name plate,” said one of the EDs, “and it said my name and ‘Spy’ on it and I put it on the front of the office.” We laughed, and it was a great sign that things are moving forward, because doing something like that in the past might have led to imprisonment or death.

After the last meeting today, I loosened my tie and walked around, breathing in the Belgrade air. I have never worn a suit and tie this often in my entire life. Miraculously I found a tiny vegan place that sold baked tofu and seitan and sandwiches, and I nearly hugged the sweet woman shopkeeper, overjoyed and relieved. “I don’t speak many English,” she said when I explained I was vegan, “but you no worry. No egg. No dairy.” It’s been several days of bread and pasta, for which I have been thankful, since this trip has been an amazing and life-changing opportunity that will likely never come again.

Still, it was so nice to have some food I could eat without wondering if it contained chicken broth or bacon fat. I bought some sandwiches and went to a nearby park and sat down on a bench in front of a statue of a local hero. It was evening. T 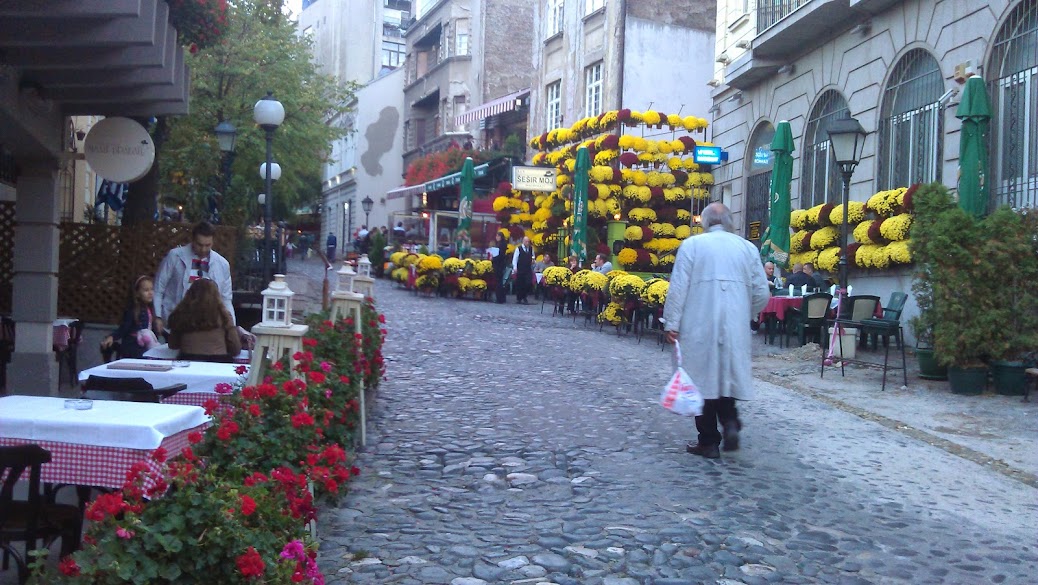 hree teenage girls were taking selfies on their phone. People were drinking and laughing in the numerous restaurants all around, munching on their grilled meat. A homeless man, carrying bags of cans, went around checking the trash bins while cars drove slowly, navigating the cobblestone streets circling the park. Above and surrounding us, buildings rose upward, some new, some old, many probably having seen the destruction of Belgrade during the countless wars. I ate my vegan sandwich and took a moment to be grateful for this trip, for having the chance to experience Belgrade during peace time. You know, more people should think about Serbia for their honeymoon.

Related post: “9 Lessons from Breaking Bad We Can Apply to Nonprofit Work“